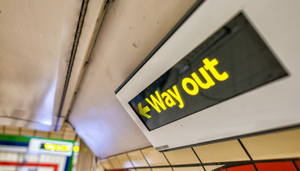 Would you want to receive a text message from authorities if your life may be in immediate danger?

From the 2012 Eaton Centre shooting in Toronto to the 2016 wildfires in Fort McMurray (incidentally the anniversary of the evacuation is this week), the ability to send a text message on the advanced wireless network could minimize chaos by sending accurate information to 97 per cent of the Canadian population instantly.

Well up until now in Canada you couldn’t receive those alerts. But, that’s about to change. On April 6, 2017, the CRTC “directed all wireless service providers to implement a wireless public alerting system on their LTE (long-term evolution) networks by April 2018.”

In an effort to catch up to other jurisdictions, the CRTC consulted last year about appetite for wireless service providers’ (WSP) participation in the National Public Alerting System for dangers to life and property. This would include “broadcast immediate alert messages” such as “imminent or unfolding dangers to life (including tornadoes, forest fires, industrial disasters, and tsunamis).”

The United States has had a system in place since 2012 – called Wireless Emergency Alerts (WEAs), which was a WSPs voluntarily initiative led through a partnership between the Federal Communications Commission and the Federal Emergency Management Agency. Such an alert was used in the most recent New York bombings.

This evolution is part of other emergency innovations the CRTC is building upon including launching an interactive map for emergency alerts from broadcast media and next generation 9-1-1 (i.e. maybe 9-1-1 texting).

Some are opposed to the idea but the major wireless service providers are in favour – at an estimated $25M cost. All submissions on the change were made public following the close of the consultation last year.

“We agree that Wireless Public Alerting (WPA) will be a significant benefit to Canadians and should be mandatory for all Wireless Service Providers (WSPs), including primary brands, extension brands, and resellers.” Bell Mobility submission

“Rogers is committed to the next chapter of Canadian National Public Alerting System (NPAS) through the rollout of Wireless Public Alerting.” Rogers Communications Canada Inc. submission

Considered a lifeline for many already, this change to our cell phones will likely pass without most of us realizing it – that is until its service is most valuable, at a time when we need it.

Diane Bégin is VP, brand communications & social marketing at ruckus Digital. Also learn about our experiences on the ground during the Fort McMurray wildfire (video) and a Storify recapping our third ruckus makers event also on the wildfire.