HomeThought LeadershipShould fake news be archived to be preserved for the future? 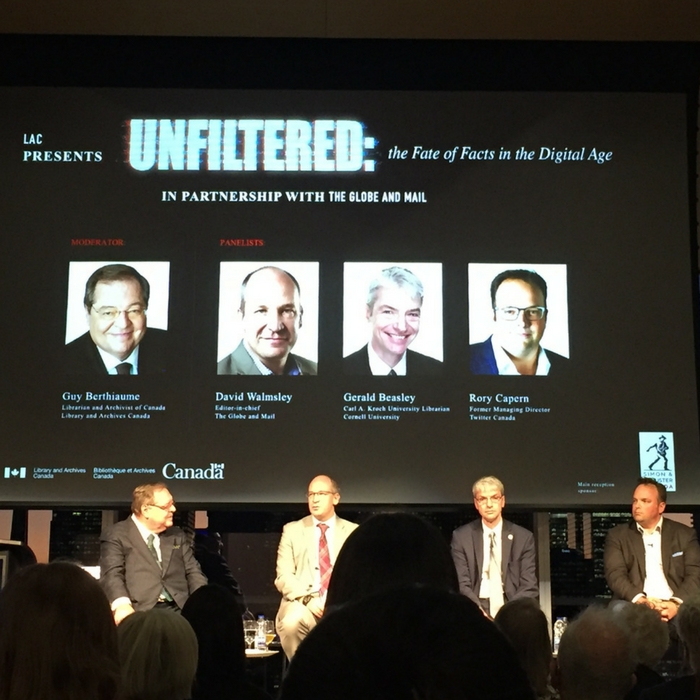 Should fake news be archived to be preserved for the future?

That question was tossed around at an October 16 event, hosted by the National Archives in the stunning new Globe and Mail Centre, called Unfiltered: the Fate of Facts in the Digital Age. (Also check out what Globe staff have said about the Centre’s views.)

The discussion was moderated by Guy Berthiaume, Librarian and Archivist of Canada and included

With respect to preserving fake news for the future, Beasley offered a compelling metaphor from silent film. Apparently 9 out of 10 movies from the silent film era (from 1895 to 1936) were not preserved because the content was considered ephemeral.

Is that the case however for fake news?

While panelists agreed it has always existed (just that US politics have placed much more emphasis on it as of late), they had varying opinions on what to do with fake news, and many questions didn’t have any easy answers.

While Twitter founder Jack Dorsey continues to assert that it’s better to know what’s on the mind of say the leader the most powerful country in the free world, libraries such as Cornell University have taken on the responsibility to provide resources to the public (like this fake news infographic) to make it easier to spot it.

Do current mainstream media outlets have a role to play in qualifying what is fake and what isn’t?

At least one audience member brought up biases if mainstream media outlets became the authority in determining what is fake and what isn’t.

While tools like the Globe and Mail fake news quiz better equips consumers of media, other much larger scale initiatives such as The Trust Project (watch for a launch scheduled for next month) is a collective initiative involving mainstream media that could be criticized for its biases. It also includes digital and social media representation from Twitter, Facebook and Google.

An interesting question to which again the metaphor of film was applied by Beasley. There was a time when audience members in theatres would clear out when a train was racing towards them.

Because the medium was new, they didn’t understand that they weren’t in imminent danger. The point being, it takes time to understand the effects of anything.

What do you think? Tell us your thoughts here or on Twitter. Diane Bégin is VP, Social Marketing and Brand Communications at APEX PR and ruckus Digital.